“We’ve got a lot of casinos here in the Wild West,” head of the SEC Gary Gensler said. “And the poker chip is these stablecoins.”

Stablecoins like USDC, USDT, and others have been catching heat. It’s no secret Gensler wants to wrest them under his control.

“It seems clear,” Bennet Tomlin from NASDAQ recently wrote, “he is trying to tie them to stable-value funds, a fund design that the SEC already claims jurisdiction over. If stablecoins, or at least stablecoins backed by non-cash assets, are securities then they will no longer be useful for the things that they are now. It seems unlikely that they would be able to continue to move and trade unimpeded across censorship-resistant global networks.”

Janet Yellen, the secretary of the U.S. Treasury is no fan of stablecoins, either…

Yellen recently convened the “President’s Working Group on Stablecoins” where she warned that stablecoins pose systemic risk to the financial system and national security.

She also said: “Depending on its design and other factors, a stablecoin may constitute a security, commodity, or derivative subject to the U.S. federal securities, commodity, and/or derivatives laws.”

Jerome Powell, current head at the Fed, says stablecoins may “carry potential risks to users and the broader financial system.”

Months ago, it was widely reported that the largest stablecoin -- Tether (USDT) -- could be dragged down by the Evergrande situation in China.

And that’s the big problem with Tether.

And although it wouldn’t kill crypto -- as some have suggested -- it could be very bad for America’s future as a hub of financial and technological innovation.

According to crypto data analysis firm CryptoCompare, roughly 55% of all bitcoin purchases are conducted with Tether.

Tether, therefore, is a key underpinning of the multi-trillion-dollar crypto market. Historically, Tether claimed to be 100% backed by “traditional currency” reserves.

Lately, however, the company has pulled back on this claim. And on May 13, under immense political pressure, Tether released a simple breakdown of its reserve assets. 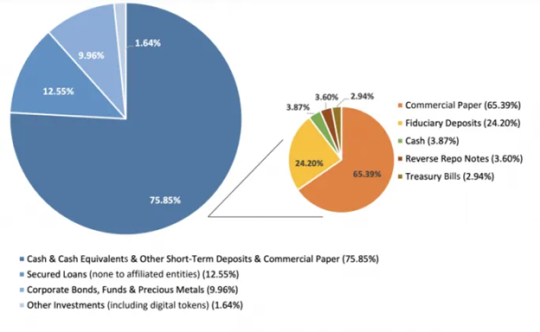 It’s one of the largest holders of commercial paper in the world.

What commercial paper? We have no idea.

65.39% is commercial paper — Commercial paper refers to a short-term loan for up to 12 months. Problem is, we have no idea where that commercial paper is coming from. Chances are, as bitcoin skeptic Frances Coppola pointed out, it’s probably unsecured: “In which case it is NOT a ‘cash equivalent’ as the analysis says. It’s a current asset with significant credit risk.”

3.87% is cash — As mentioned, up until the company fell under scrutiny, Tether maintained tethers were fully backed by cash.

3.6% is reverse repo notes — Martin Walker, a director for banking and finance at the Center for Evidence-Based Management, believes Tether made this up: “I’ve never heard of a Reverse Repo Note before, and I am the product manager for a couple of repo trading systems and used to run repo technology at an investment bank,” he told Castor in a private chat.

2.94% is treasury bills — T-bills are issued by the U.S. Treasury with maturity periods from a few days up to 52 weeks. They are as good as cash. “In fact,” says Castor, “this is the only slice of pie, other than cash, that can be considered cash.”

In September, Tether issued a statement: “To be clear,” they said, “our commercial paper is not tied to Evergrande.”

Even so, worries still abound that if Evergrande does fail, Tether is still at risk by proximity.

Nathan Anderson, founder of forensic financial research firm Hindenburg Research, suspects Tether is hiding something. His firm is offering a cool $1 million to anyone who can provide information on Tether’s actual reserves.

“We feel strongly that Tether should fully and thoroughly disclose its holdings to the public. In the absence of that disclosure, we are offering a $1,000,000 bounty to anyone who can provide us exclusive detail on Tether’s supposed reserves.”

Again, Tether is not a cryptocurrency.

During a recent $600 million heist on the Polygon network (which was returned), $3 million of that was in Tether. Tether later revealed they used a built-in failsafe to freeze the assets soon after the theft.

Meaning, of course, unlike other cryptos, Tether is highly centralized, opaque, and is a closed network. Exactly like the traditional financial system.

And again, Tether’s demise could affect the crypto markets all the same. And it could also help create the political juice necessary for regulators to ban stablecoins and usher in their own centralized coins -- CBDCs.

And make early investors a mint.

“Powerful forces are at work…”