Yesterday, the St. Louis Fed published a blog post comparing the price of eggs in U.S. dollars and bitcoin’s smallest unit, the satoshi.

The story goes that they began by looking at the average cost of eggs in U.S. dollars. 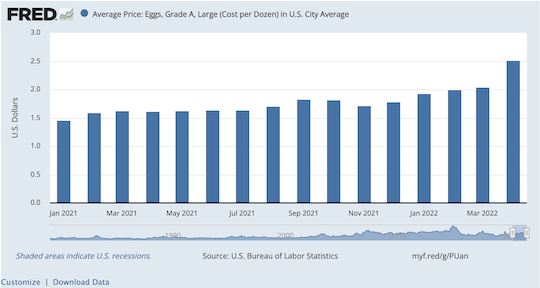 Then, they got the idea: Hey, what would the graph look like if we purchased our eggs with Bitcoins instead of dollars?

Here’s what they found, as posted on their blog:

“The price fluctuates quite a bit, between 2829 and 6086, which is much more than it did for the U.S. dollar price. Plus, you’d need to add a bitcoin transaction fee, which has been about $2 lately, but which can spike above $50 on occasion. Hopefully, if you were making this purchase with bitcoin, you’d put many many more eggs in your basket.” 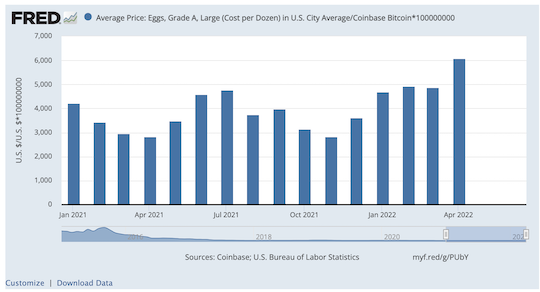 It’s a safe bet that this post was meant to taunt Bitcoiners.

If so, a popular example of a “self-own” is when someone inadvertently highlights evidence that contradicts their point…

As the Fed did in the above example.

If we look a bit closer at the provided graph we’ll see that the overall inflation rate of eggs priced in satoshis is actually lower than dollars in the allotted time frame.

Furthermore, if we zoom out, we see that the price of eggs, when measured in satoshis, fell by about 99% since January 2015. 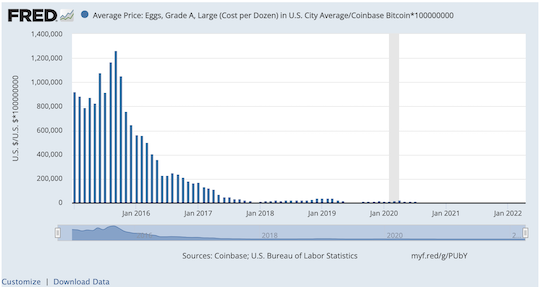 As for the remark about the transaction fees:

If Bitcoiners were keen on buying eggs with Bitcoin, this might be an issue.

(That said, if a Bitcoiner did buy eggs with BTC, they would likely use the lightning network, where the transaction fees are a few cents at most.)

But the ability to buy eggs isn’t why most Bitcoiners are bullish on BTC.

It’s Not About Buying Eggs

Bitcoiners are bullish on BTC because it’s a provably scarce bearer asset that can be easily self-custodied and transferred that’s secured by a decentralized network of nodes running open source software.

Buying eggs with Bitcoin instead of dollars is like driving an Airbus ACH160 helicopter to the local grocery store instead of your Honda Accord.

As Bitcoiner Marty Bent said, it’s odd that those at the St. Louis Fed office would attempt to try to dunk on Bitcoin in this way specifically.

“Maybe,” Bent suggests, “it's a low-key veiled endorsement of the next reserve currency of the world. A subtle signal that people should begin considering bitcoin as their monetary good of choice. Is the St. Louis Fed breaking ranks and acting as a fifth column actor attempting to undermine the dollar's status from within?!”

Occam’s Razor suggests that the academics at the Fed have egg on more than just their minds.

America has crossed the ‘chasm’ of ‘is this real’ (yes) and ‘will it be banned’ (no). The questions/challenges are different now.