He said he had special technology that could pinpoint my biggest problems. He asked if I wanted to try it.

He pulled a machine out of his book bag that looked like Hasbro’s rendition of a lie detector test. 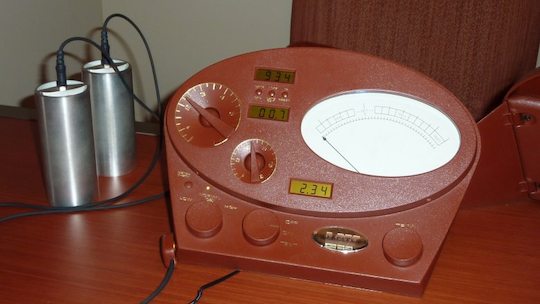 “Hold these,” he said, handing me two metal rods.

He turned the machine on and the dial began to sway back and forth and then settled on a spot he called my “baseline.”

“How is your relationship with your father?” he asked.

“Ah. Interesting,” he said as he wrote something down in his notebook.

“And what about your mother?”

For the record, I wasn’t buying it.

But, Scientology did teach me one thing worthwhile.

Scientology promises to solve all your problems.

But Scientology’s genius isn’t in giving you specific solutions to specific problems. Scientology makes you rethink the concept of problems.

Hubbard believed that humans create fake problems so they don’t have to deal with the real problems.

There’s truth to that. Look at the political class. They’re masters at inventing problems so they don’t have to solve the real ones.

Psychologist Carl Jung put it like this: “Neurosis is always a substitute for legitimate suffering.”

Jung said that many of us suffer neurotically so that we don’t have to suffer authentically.

In essence, he said:

The real problem with the world isn’t that we have too many problems. It’s that we’re not good at solving real problems, so we invent fake ones (neuroses) to keep from confronting the real ones.

The world is now run by the unconsciously incompetent: people who don’t even know they’re incompetent. And the only way to cover up incompetency is to try to solve problems that can’t possibly be solved.

Problem-Solving is a Skill

George Polya hacked at the root of the problem: we’ve forgotten that problem-solving is a skill that must be learned.

Polya was a world-famous mathematician and professor.

He wrote a book called, “How to Solve it”.

It’s a book on solving all problems in the same way you would solve a math problem.

His method sounds simple, but that’s also its strength.

1. Understand the problem.
2. Connect what you know with the unknown.
3. Carry out a plan.
4. Examine obtained solutions.

My Scientologist friend was right (and wrong):

Sure, the world is flush with problems. But the biggest problem isn’t that we have problems.

It’s just that we’ve forgotten how to solve big problems. So we settle for fake problems that never quite hack at the root.

Life-hack: Solve real problems — or, as an investor, find people who do — and the world is your oyster.

More on that tomorrow.