It’s a term we brought up yesterday to describe a system in which bad actors get rewarded and good actors get punished.

The prime example is San Francisco, where the Uber driver — who’s just trying to make a living — has to contend with increasing regulatory red tape, outrageous parking tickets, getting his car towed arbitrarily, getting his windows broken and life threatened by crazed ramblers, and being forced to pay an ever-increasing tax bill…

Meanwhile, the criminal who broke his window and threatened his life doesn’t just get off scot-free, his lifestyle is subsidized — perhaps in more ways than one — by the Uber driver.

Only a tiny minority of criminals and politicians see this as a desirable system. Unfortunately, in the short term, it might continue to sweep through the United States nonetheless.

If true, there are three ways this could play out.

Crypto has the potential to be that tertium quid, Latin for the “third way” — a popular concept in Medieval alchemy. Alchemists used the phrase to describe the process wherein you add two undesirable elements (lead and coal, for example) to create a third thing… something completely new and desirable (gold).

Consider, anarchy and tyranny, though undesirable in their extremes, hold within them two desirable attributes — chaos and order. As the hip-hop duo Jedi Mind Tricks said in their otherwise unenlightening song Heavy Metal Kings: “Without order, nothing exists. Without chaos, nothing evolves.”

How does crypto combat drastic chaos and tyranny by using their better elements against them? It’s simple. It does so by reasserting the very thing that both of these things, in their extremes, deny: self-ownership.

Changing the Logic of Violence

Consider that Chairman Mao’s violent legacy crumbled when a few small farmers began conspiring to keep a portion of their grains.

That’s all it took.

And the government only found out about their scheme because their production miraculously skyrocketed.

It increased so dramatically — and during a time when many starved — the government decided not to kill them for their betrayal to Communist ideals.

This was quite the ‘great leap forward’ given, previously, any act of entrepreneurship — even the thought of it — was punishable by death.

Instead, the government began opening up and allowing more people to capture the value they created. (Of course, China never completely let go of its tyrannical roots.) 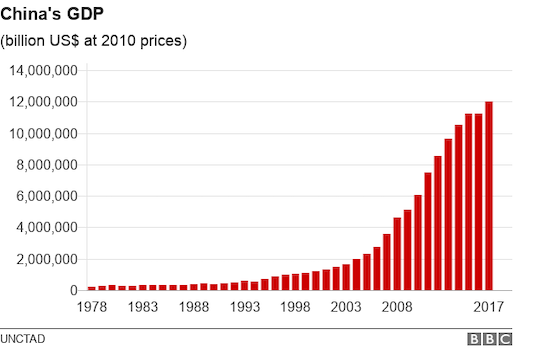 Because of crypto, for the first time in history, no matter the situation…

Billions of people worldwide now have the opportunity to take custody of their wealth and capture more of the value they create — even those who’ve never had a bank account.

They get to keep a portion of what they earn without interference. And, if done correctly, do so in a way that cannot be confiscated or stolen.

Imagine what kind of innovation and prosperity can be unlocked by an entire world having this option.

The mere existence of this option in the world could radically change the way governments govern.

Today, we operate under a scarcity of trust but an abundance of computation.

Crypto networks have the power to take what is abundant (computation) and turn it into systemic trust — immutable ledgers we can all agree on.

In this scenario, violence becomes more costly. In fact, at a certain point in the adoption curve, the logic of violence flips: political violence becomes cost-prohibitive whereas cooperation becomes the most lucrative path forward.

Put in simpler terms, the only way to win is to play the game.

Again, the amount of innovation and prosperity that could be unlocked by this single leap forward — apart from what else crypto can provide — is impossible to understate.

Beyond chaos and tyranny…

There is crypto’s tertium quid.

Death of the Nation State?

In 100 years, historians will focus, above all else, on us. Why? Because we sit at the most pivotal moment. Just before the greatest wealth and power shifts in human history.

99% of our crypto research behind the scenes goes toward identifying which cryptos could hit mass adoption first.

5 Reasons Bitcoin is About to Skyrocket

There are several reasons to believe the contrarian position is right… and that crypto could have an explosive 2022.

The Future is Volatile

Many on Wall Street continue to believe that Bitcoin is akin to digital gold, or at least a hedge against inflation. And while that may turn out to be the case in the future, it’s not a reality today.

How Not to Get Crypto Scammed

It sounds boring, but the best and safest path is to buy and hold. Nothing more to it than that.

Start Your Own Country

Software allows you to start your own business, community, currency… but what about your own country?

“The objective,” Prince Hans-Adam said, “must be to transform all states into peaceful service companies.”