On May 6, we reported that, indeed, crypto was going to see a “Come to Jesus” moment.

Though this crash is already pretty ugly, it might not be over.

The overall mood is still pretty negative, and, like it or not, the sentiment is shifting. Our job is to adapt and see where that sentiment is headed.

Go where the puck’s headed.

Shakeouts are a good time to take a step back and see what the market is telling us… and, of course, scope out new projects.

One new crypto has entered my “watchlist.” It’s definitely flying under the radar… for now.

It’s the ONLY crypto Warren Buffett has a stake in. (Though he might not know it.)

I’ll reveal what it is in a moment.

First, as a backdrop, consider the current sentiment.

→ Critical infrastructure and centralized systems are heinously vulnerable to relatively simple cyberattacks. The Colonial Pipeline is the most dramatic, but it’s far from alone.

Consider, ransomware attacks took off in 2020, with victims paying a record-setting $406.34 million worth of cryptocurrency to attackers last year, a surge of over 337% from 2019 where the bad actors collected $92.94 million.

→ The renewable energy movement is moving into its “warp speed” phase. Agree with the way it’s being done or don’t. Doesn’t change a thing. It’s happening. And there’s immense pressure for corporations to lean into projects in the green space, whether it’s empty virtue signaling or not.

→ Moving forward, we need a way to integrate renewable energy into the greater grid.

→ And, Elon Musk has the power to move markets and shift sentiment with a single tweet. He recently released this statement on Twitter: 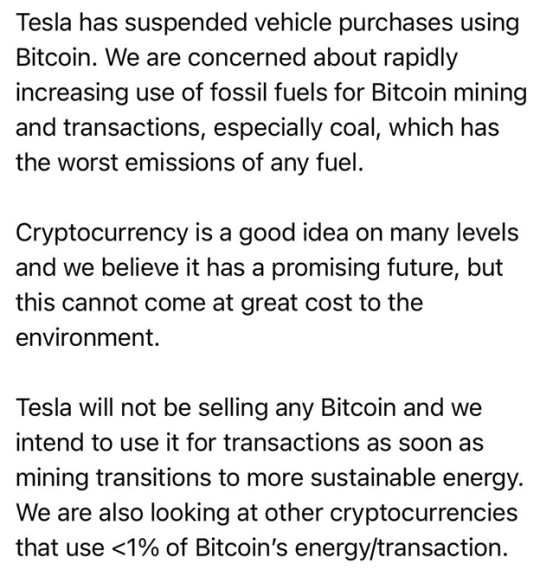 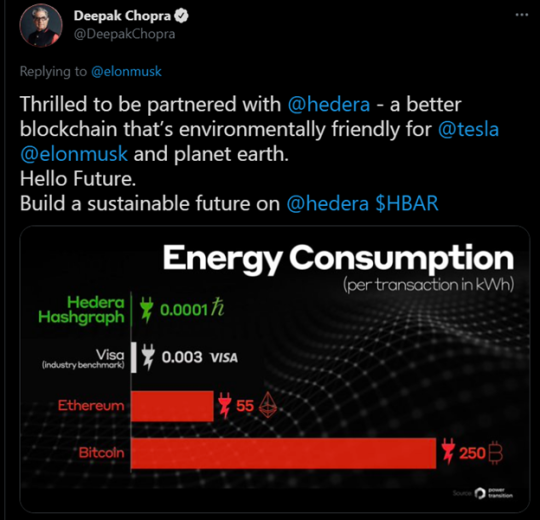 Hedera has problems. It’s far from efficient, closed source (nobody can audit the code) and highly centralized.

EWF claims in their whitepaper that their blockchain has 2-3 orders of magnitude lower energy consumption than Ethereum. It uses a novel “proof-of-authority” mechanism, allowing it to scale to millions of transactions with the electricity consumption of a medium-sized office block. (As opposed to a medium-sized country.)

Of course, there are always trade-offs.

Unlike most blockchains, EW Chain has validator nodes that are run by both blockchain-focused companies and known and trusted corporations. Many of the corporations are large energy providers.

The idea is to integrate renewable energy-producing assets to the “energy web.” Though EWT is targeting huge energy companies, small solutions can be integrated as well, creating a grid that can (like THETA does with bandwidth) distribute energy in a far more efficient way.

For example, I’m a (tiny) investor in two alt-energy companies through equity crowdfunding.

1.] Harmony Turbines: Innovative residential wind power devices that can be installed in any yard in America. (1st-generation, but I think the idea has promise.)

2.] Neighborhood Sun: A Maryland-based community solar project that allows people who can’t get solar panels on their roofs to connect to a solar grid. Ground-mounted solar farms provide energy for anyone who signs up for the network.

Thousands of projects like this are set to pop up all across America. The question, of course, is how do we integrate all of them together to create a distributed grid that anyone can participate, and even invest, in?

If you have an energy-producing device like Harmony Turbine, for example, through EWT’s automated smart contract platform, you can sell the energy you don’t use.

Moreover, the Energy Web could (could!) allow individuals to invest in smaller-scale energy projects directly, and from anywhere around the world.

In an effort toward this goal, the company recently partnered up with Blockchains LLC and Energy Web to launch a blockchain pilot expected to enhance the tracking of credits associated with renewable energy generation.

Though utilities often meet RPS requirements by procuring large-scale solar and wind energy resources, with Energy Web, they can incorporate small-scale projects, too.

“Smaller customers — like residential rooftop solar households — can be contributors to RPS requirements,” explained Walter Kok, CEO of Energy Web. “Nevada’s PEC Trading Pilot Project is studying how they can more-easily contribute to the state’s RPS. We’re excited to partner with NV Energy to help the entire system to reduce costs and increase customer participation.”

The grid is decentralizing, and EWT is uniquely positioned to accelerate this trend.

Not only could it allow for a more dynamic and resilient grid, it’ll also allow individuals to become participants in the energy network, even potentially earning passive income from their solar panels or other devices. (Moreover, it’ll make the grid far more secure from cyberattacks.)

Though there’s still some homework that needs to be done…

Right now, EWT is worth a look. I’m keeping my eye on it.

P.S. Got something to say? Say it!

Silver and “The Shameful Eight”

“Silver is overvalued.” Three words you’re not likely to hear. While corn is gunning for the 2012 all-time high, up more than 50% in 2021… And soybeans have been trading only a hair...