We’ve got a jam-packed missive for you today, all colliding into one hot mess of intrigue.

And why a few of them believe Musk is the mysterious Texan billionaire who just bought over 1 million ounces of physical silver. (And plans to buy more. A lot more.)

Let’s start from the top.

The Case for the Silver Swan

In the 1960s, the Hunt brothers -- American oil billionaires -- tried to corner the silver market for profit.

Instead, they suffered a loss of over $1 billion, nearly eradicating their family fortune, because the government stepped in and intervened.

Then, in 2010, financial analyst and provocateur Max Keiser started a movement to bankrupt JP Morgan by buying physical silver.

The idea was that JP Morgan was artificially suppressing the price of silver through a $3.3 billion short position.

According to Keiser, it wasn’t just to line their pockets. It was also to “keep the relative appeal of the dollar and other fiat currencies high.”

Both of these efforts failed in their aims. But there’s a new group in town that wants to try it again.

Yesterday, we covered the WallStreetBets saga and showed how it transformed into a movement called WallStreetSilver (WSS).

The WSS crowd — now 200,000 strong — believes they can finish what Keiser started…

And squeeze silver shorts so hard that JP Morgan craps the bed.

Beyond their investment thesis, there are three reasons they think RIGHT NOW is the time to back up the truck on silver.

ONE: Price Manipulation is Ending?

One, their suspicions of JP Morgan have been, at least in part, vindicated.

Three JP Morgan executives are currently under trial for manipulating the prices of precious metals.

Matthew Sullivan, an attorney in the U.S. Department of Justice, said this during his closing arguments:

“For years, executives at one of the world’s largest banks conspired to manipulate the markets for precious metals. All three worked together toward the same goal: earning profits for the precious metals desk by spoofing.”

TWO: Big Money is Waking Up?

And the second reason: a mysterious Texas billionaire bought about 900,000 silver eagles for $50 million.

Andy Schectman from Miles Franklin brokered the deal and said this:

“The client wants us to tell the world that she placed this order. We received a $50 million wire without even as much as an email or an invoice to acknowledge it. She just wired the money.”

It took him everything he had to fill the order… and then some.

“I cleaned out every silver eagle I could find. We had 90,000 in stock. I had to find over 800,000. I called every distributor and took the allocations into August.”

This mysterious billionaire also told Franklin that this is the first of several orders to come. She plans to buy up to a billion dollars worth of precious metals.

Schectman ended with this:

“I think it’s emblematic of big money, for the very first time, waking up.”

Third, many in the WSS crowd believe Musk is a secret silver stacker. It’s not entirely irrational.

Shortly after, Maloney sent an open letter to Musk, urging him to load up on physical silver.

In past interviews, Musk has danced around the edges of the silver markets, never talking about it directly.

Both of these things have spurred (wild) speculation that Musk is the mysterious Texan billionaire currently buying up silver.

My own suspicions were raised about Musk’s potential affinity for silver last year, when Musk began pumping Dogecoin.

For no apparent reason, the post was almost immediately deleted.

That’s why the WallStreetSilver subreddit group, which now boasts almost 200,000 members, was created on January 29, 2021. 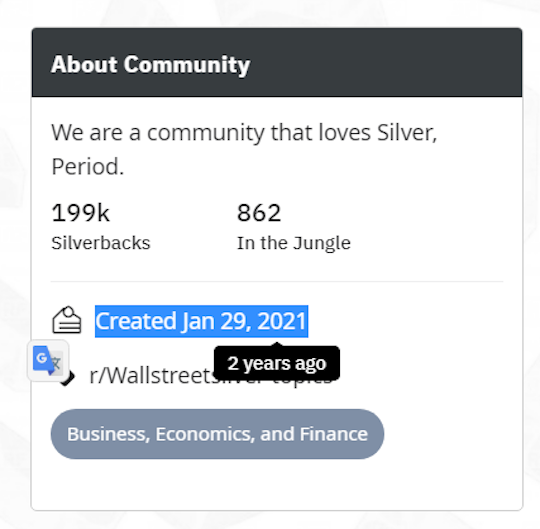 The WSB  crowd was pretty high on themselves after their “Gamestop Moment” made international news.

Moreover, they were hungry for another “meme play”...

The “silver squeeze” meme was gaining steam in their forum and, to a lesser extent, on Twitter. 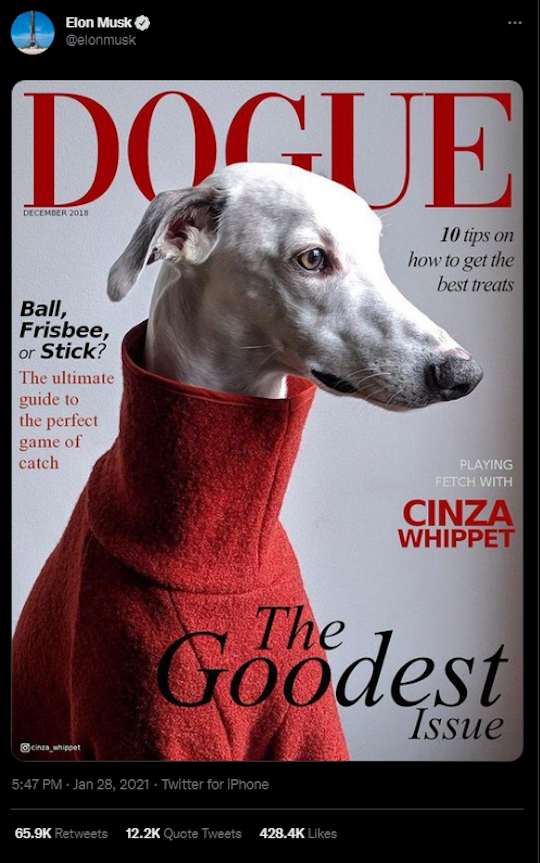 Speculators took this to mean that Musk was bullish on Dogecoin, and, on January 29, the token skyrocketed 682%.

Then, on February 4, Musk confirmed the suspicions when he tweeted this: "Dogecoin is the people’s crypto.”

Dogecoin jumped another 57% soon after.

This sucked no shortage of attention in the WSB crowd into Dogecoin… and, perhaps, away from silver.

Is it a coincidence that Musk began pumping Dogecoin as soon as WallStreetBets took an interest in silver? Perhaps.

But the timing is, nonetheless, curious.

Our colleague Jim Rickards is also bullish on silver…

But for completely different reasons than the WallStreetSilver crowd.

Jim doesn’t need to speculate. His newest book, Sold Out, lays out the case that nothing is as it seems. Moreover, Jim reveals what you should do before it’s too late to act.

He talks about many of these predictions in his latest interview.

Is the government trying to kill crypto? Is crypto just a den of thieves, crooks, and cheats?