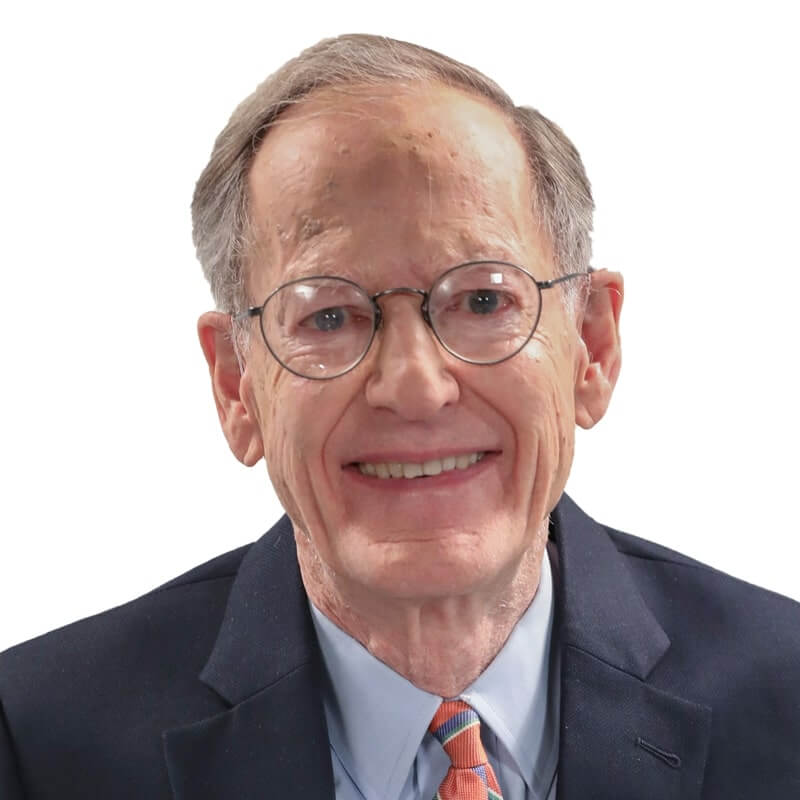 “A chicken in every pot and a car in every garage.”

Herbert Hoover said it first… but not all of it.

Apparently, this political slogan’s roots run deep -- all the way back to Good King Henry, King of France from 1589 to 161.

He declared as his goal prosperity in the kingdom, which included, "A chicken in every peasant's pot every Sunday."

Fast-forward to the sci-fi age…

Our colleague George Gilder suggests this catchphrase needs an upgrade for the 21st century: “A lab-grown chicken in every pot and a flying car in every garage.”

The chicken is here.

In 2020, lab-grown chicken was approved for sale in Singapore – a world first.

And, says George, the long-promised flying car is closer than ever.

More on that from George below in today’s featured article.

Before we go there, though, some housekeeping…

NOTICE: Big Changes to Our Company

As you may know, our parent company, Paradigm Press Group, has gone through a few big changes lately.

And all of them have been positive for the Paradigm universe.

But the best is yet to come.

“Up until this moment,” says our publisher, Matt Insley, “our editors and gurus, some of the best and brightest minds in the world… James Altucher… Jim Rickards… Ray Blanco… They were all unable to invest alongside you. Recently, that’s shifted. And it’s a game-changer.”

It’s so big Doug and Matt held an emergency call to talk all about it. And describe how it changes our business moving forward.

If I had to guess…

It will prove to be one of our most important calls of the year.

In case you missed it…

In the spirit of the new year, while legions of tech enthusiasts are cruising the halls of CES 2023, we’re taking the opportunity to take our own peek into the future of technology—transportation technology, to be specific. What might that future look like?

Well, perhaps we could start with a slightly updated version of the old political slogan in what might prove to be a surprisingly near-term future: “A lab-grown chicken in every pot and a flying car in every garage.”

Sound far-fetched? Maybe not… But let’s get back to the present and see what’s happening on the ground, right now—the squeaky hinge to this most interesting vision of the future. And let’s begin with the state of the automotive industry, which is grappling with not one but two major technology disruptions.

First, the advent of the EV is leading (if not forcing) automakers to re-architect (if not reinvent) their vehicles, literally from the ground up, to become more energy efficient.

The second disruption lies in the accelerating advancements in autonomous driving and the AI-driven cockpit. Both technologies have already absorbed massive investments. And both are generating unprecedented amounts of data that the industry is only beginning to exploit. Indeed, while the car may not yet be a smartphone on wheels, it’s rapidly evolving in that direction: mechanical engineers are being increasingly displaced by machine language developers.

Now, the automotive industry is, of course, earthbound. At least it is today. Being terrestrial in nature, the aforementioned technology developments, impressive as they are, concern the flow of vehicles on the ground—a very two-dimensional state of affairs.

And while the jury is out on the extent to which autonomous driving will alleviate traffic jams (there are compelling arguments on both sides of this question), it will certainly alter the way we get around: the commute hour may actually become productive time. At minimum, our invisible robotic chauffeurs might make the ride more enjoyable.

But let’s elevate the idea of transportation to a more planetary scale. Or at least, let’s see how things might look if we add a third dimension to our everyday mobility.

Venture capitalist Peter Thiel is famous for quipping, “We wanted flying cars. Instead, we got 140 characters.” Ironically, Twitter—the brunt of that reference—is now in the industrious hands of Thiel’s former PayPal partner, Elon Musk, who is busy diversifying his entrepreneurial endeavors behind Tesla and SpaceX. Perhaps to Thiel’s surprise, we are, at last, witnessing the emergence of flying cars. 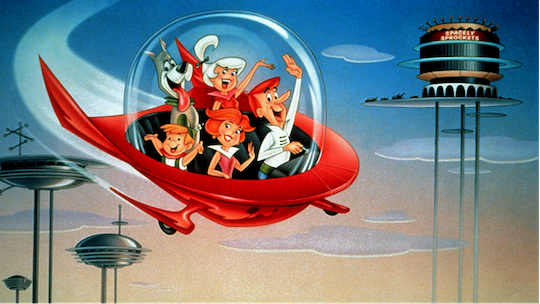 Now, the concept of urban air mobility (UAM) is by no means new. After all, it’s a staple of science fiction that spans The Jetsons to Chitty Chitty Bang Bang to Star Wars. And in science fact, it has quite a history.

Since John Emory Harriman filed the first patent for his “aerocar” in 1910, we’ve been alternatively excited and disappointed by a steady stream of prototypes and promises. It’s not hard to see why. Consider, for example, Waldo Waterman’s Arrowbile—the first vehicle to leave the street for the sky in 1937. 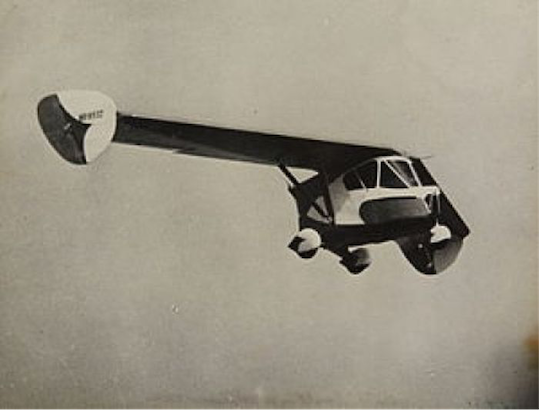 And then there’s the ConVairCar Model 118 flying car, pictured below in a test flight over California in 1947. For better or for worse, it never went into production. (One of the two prototypes built did, however, crash.) 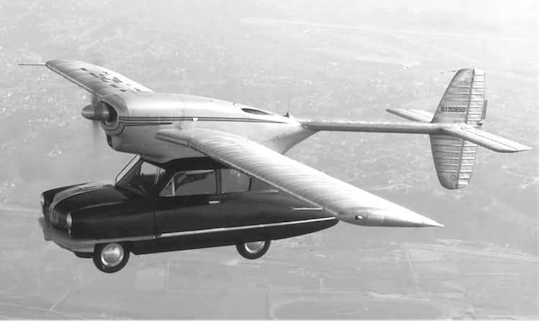 And yet, while the idea of the aerocar has been maligned almost as much as the Edsel, even Henry Ford predicted its arrival. “Mark my word,” he said in 1940, “a combination airplane and motorcar is coming. You may smile, but it will come.” Well, Ford may have had to wait eight decades for a practical manifestation of such a thing, but a production flying car did eventually come to pass. And now the field is going mainstream.

Modern renditions, though, have flipped the script, approaching the problem not by thinking “car-first” but “flying-first.” In short, by taking this route, the engineering challenge is greatly simplified—and the end result more practical—by starting with helicopters and then making them more like cars.

This brings us to a very interesting Swedish company called Jetson Aero. Founded by Tomasz Patan and Peter Ternström in 2017, the company has been diligently working on fulfilling its ambitious mission to make the skies available for everyone with a safe personal electric aerial vehicle. 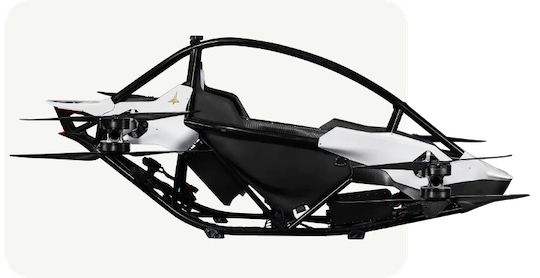 The Jetson ONE is the first affordable EVTOL (electric vertical take-off and landing) that anyone can now order. Think of it as a jet ski for the sky—an elegant, lightweight craft constructed with carbon fibers and aluminum. The Jetson ONE has eight powerful motors driving an equal number of propellers, and with a massive power output of some 88 KW. The Jetson ONE features a race-car-inspired safety cell that protects the pilot, can sustain continuous flight with the loss of one motor, has an auto land function (enabled by a LiDAR sensor), and multiple safety features to protect the pilot in case of an emergency.

Check out this video for a peek inside the brilliant engineering that’s gone into this craft.

What’s more, it’s easy to fly. The company claims that owners can learn to pilot one in just five minutes. And if you reside in the U.S., no pilot’s license is required.

While the Jetson ONE represents a great step toward fulfilling Peter Thiel’s futuristic vision, we shouldn’t expect to see the skies filled with EVTOLs anytime soon. The price tag rings in at $92,000, and even then, the entire 2022 and 2023 production is already sold out. If you want one (and who wouldn’t!), you’ll have to wait till 2024 for delivery.

It is still early days for EVTOLs. Jetson is currently a privately held company generating little in the way of revenue today. However, as costs decline and capabilities improve—as they surely will—the company’s fortunes will expand. Given the company’s impressive progress thus far, it is easy to see the potential for exponential growth in the market for flying cars.

The Moonshots investment space is pregnant with such opportunities. While the entrepreneurs at Jetson continue to work on fulfilling their mission, we’ll continue to scour the investment landscape for promising emerging technology companies that have the potential to produce market-trouncing returns.

And that’s not hyperbole.

Allied Market Research, for example, forecasts that the total global Urban Air Mobility market, which generated $2.3 billion in 2021, will exceed $30 billion by 2031—a CAGR of 30%. The global eVTOL aircraft market segment alone is expected to exceed $4 billion by 2033, increasing from $458.0 million in 2025, also at a healthy rate of 30%.

The other segments comprising the sector are just as exciting. These include air taxis, air shuttles, various forms of personal air vehicles, cargo air vehicles, air ambulance, and medical emergency vehicles, last-mile delivery vehicles, and the military market, which will claim no small share. And then there is United, which hopes to see the first air taxis in operation by 2024. These are expected to be used to shuttle passengers to hub airports, rather than flying or driving them there with standard planes and cars. As such, investing early in the right companies promises huge gains over the coming years.

And it’s all getting accelerated by investments among the likes of Google’s parent company Alphabet, Toyota, Amazon, Lockheed Martin, Hyundai, and other major players. As such, the space is not only legit, it’s getting crowded with a great many innovative contenders emerging, many advancing and converging adjacent technologies, like Anita Sengupta’s intriguing company, Hydroplane. Dr. Sengupta’s history exemplifies the brain trust now dedicated to this rapidly developing space. She left her post at NASA to become Senior Vice President of systems engineering at Virgin Hyperloop. And following several years in the battery-powered eVTOL sector, she saw the need for a more evolutionary approach to electric aviation, with hydrogen fuel cell technology, which she is developing now at Hydroplane. There’s much to look forward to here.

All of this is to say that this is an exceptionally exciting and promising space, no longer waiting in the wings of science fiction writers’ imaginative minds. Stick with us as we work to identify the best investment opportunities in urban air mobility.

[Editor’s note: This article was an exclusive look into George Gilder’s Moonshots newsletter. Stay tuned for more from George in the coming weeks.]

The (Bogus) Case Against Gold

Is gold a hold or a fold?