Own Ethereum? Do This Now!

Ethereum is about to undergo its biggest upgrade yet: The Merge.

This move has been several years in the making… And there have been countless last-minute delays.

So there’s A TON of skeptics in the crypto market saying it won’t happen.

Others believe that the Merge isn’t priced in yet BECAUSE of these widespread skeptics. When the Merge DOES happen, they say, Ethereum will skyrocket.

And then a sell-off.

A sell-off will be a huge opportunity to get into not just Ethereum… but also several other tiny coins we believe will benefit big in the Post-Merge world.

More on those smaller coins — and why they’re a bigger deal than Ethereum —  in a moment.

Before we go there, there’s something you should know if you’re holding ANY Ethereum right now.

I’m about to show you a way to make…

And if you own any Ethereum, there’s no reason NOT to do it.

I expect to see a ton of Ethereum forks in the coming weeks and months. A “fork” is when a programmer creates a copy of a cryptocurrency, forking the blockchain into a new token.

Often, a fork of a blockchain is just a copycat. Someone will create an identical fork and act like they have the “next Bitcoin” with amazing new technology. (Really, it’s just a pump and dump.)

Sometimes, as in the case of Bitcoin Cash, a fork is a protest against the main blockchain. In 2017, a large group of people in crypto believed that Bitcoin should have bigger blocks to support more transactions. Bitcoin developers refused, saying it would compromise decentralization.

This caused a flurry of other forks trying to cash in on this trend.

During these “Block Size Wars,”  there were over 15 forks of Bitcoin, some of which are still around. 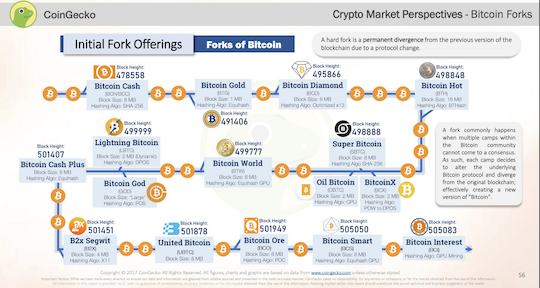 If you held Bitcoin, you were entitled to receive these forks.

(With those 5 Bitcoins, you could’ve gotten 5 Bitcoin Diamond coins and cashed those in for up to $520 in free money.)

If you sold these at the top, you would have come out big… and it was all FREE money.

I expect something similar to happen with Ethereum.

Right now, a small team who believes Ethereum should remain a Proof-of-Work chain  is planning to fork Ethereum into what’s called ETH POW.

Similar to what happened in 2017, I believe this will incite a flurry of forks… Some of which will go up in price based on pure speculation.

How to Claim Your Forks… And More.

Now, here’s the thing about the forks…

Any holders of the original cryptocurrency are entitled to receive this fork, too.

Meaning, if you hold Ethereum, you’re entitled to these forks.

BUT, you have to make sure you have your coins in a wallet that supports the fork.

So, there are TWO things you need to do today to get ready for the Merge.

Two Things to Do RIGHT NOW

In the short term, these forks will probably dampen the price of Ethereum and other valuable projects in the Ethereum ecosystem. Some people will complain… and I won’t be one of them.

Rather, this is a HUGE opportunity to get into the valuable coins before they soar… and cash in on the forks before the hype dies out.

1.] Make sure you’re holding your Ethereum in a self-custody wallet like Metamask or a hardware wallet. That way, you can ensure you’ll receive the forks. (And then, sell them when you feel is best for FREE money.)

2.] Get ready for our Crypto Disruption Summit, where James Altucher will walk you through the Merge… show you why it’s a big deal… and reveal why a small number of tiny cryptos could explode in the coming weeks and months. To reserve your spot automatically, just click here.

Don’t miss out on our Crypto Disruption Summit. It’s one of the biggest online crypto events of the year… and will reveal the BIGGEST opportunities in the Post-Merge world.

The Next Big Disruption in Crypto

The mighty Spanish army couldn’t defeat the Apache for the same reason that the record labels weren’t able to squash the P2P trend.