Spend any time in crypto and you’ll hear this foundational buzzword: decentralization.

Contrary to popular thought, all of this talk about decentralization in telecommunications and software is nothing new.

The groundwork for nearly all of the innovation happening in crypto was laid out decades ago.

Understanding this simple fact can help you separate the wheat from the chaff. It reveals that, while crypto seems to be moving at breakneck speed, most of it is just noise.

In our Big Book of Crypto, for example, we talked about the theoretical origins of the cypherpunk movement. Though important and revealing, crypto’s historical underpinnings go back even further than that.

In 1964, Polish-American engineer Paul Baran was the first to articulate the case for decentralization in a paper called “On Distributed Communications.”

At the time, Baran was working for the RAND Corporation, a military think-tank focused on building telecommunications for post-nuclear attack scenarios.

At the peak of the Cold War, while tensions were sky high, Baran criticized the prevailing military communications protocols. He said they were too vulnerable, advocating for a move to a more decentralized design.

This iconic picture, familiar to all who work in crypto, is the first visual expression of centralized, decentralized, and distributed software architecture. 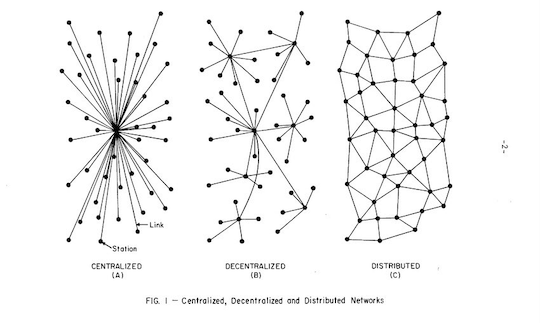 Though his proposal was deemed far-fetched, it eventually laid the groundwork for the World Wide Web and now crypto.

Baran was also a huge privacy advocate, stating that: “The issue of preserving privacy is not that of keeping alive a quaint custom. Rather, it may be a necessity in maintaining a form of society as we know it.”

In May 1968, he wrote a paper called “On the Engineer’s Responsibility in Protecting Privacy.”

At the very least, this paper reveals that the discussion over privacy hasn’t changed much since the 1960’s.

“There are many among us,” he wrote, “who feel no need for personal privacy. ‘Only the guilty need fear. I have never done anything wrong.’ In fully selfish terms, privacy may be important both to we saints and to all others if we are to preserve the value structures and the stability of our society.”

What he said next proved that he was well ahead of his time: Baran wrote that software engineers have an opportunity and a responsibility to integrate privacy into all digital communications systems.

“What a wonderful opportunity awaits the computer engineer to exercise a new form of social responsibility. The advent of the new computer-communications technology need not be feared with trepidation as we approach 1984. Rather, we have in our power a force which, if properly tamed, can aid, not hinder, raising our personal right of privacy.”

“It may seem a paradox, but an open society dictates a right-to-privacy among its members, and we will have thrust upon us much of the responsibility of preserving this right.”

Although the crypto markets right now don’t seem to care much about privacy, with the rise of DeFi, we suspect that will change.

By design, blockchains are radically transparent.

At some point, we suspect there will be a rise in demand for more privacy.

What Games Can Teach Us About the Markets

It’s a point that James has been hammering in our recent live calls for subscribers: the markets hate uncertainty more than anything.

We are entering into a new economic environment, one we will not recognize. The old rules will not apply. We’ll see and experience things as never before.

10 Reasons I Hate Having Opinions

Not just because everyone has one…

‘The consequences,’ Arthur Laffer said, pushing the napkin away, ‘are obvious!’

Few things are more dangerous to the future of humanity than a failed and humiliated ruling class that still possesses power.

James and Doug dropped everything to record an emergency crypto briefing.