According to Chainalysis’ crypto adoption index, 19 out of the top 20 countries are developing countries.

The only outlier is the United States. 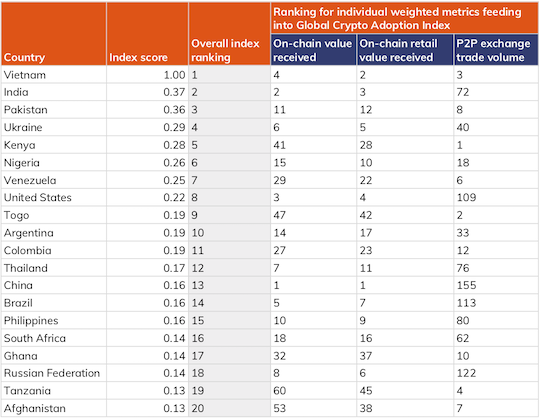 Though many find this surprising, it’s not.

The vast majority of these countries are also — by no coincidence — most likely to have arbitrary bank freezes and persistent inflation problems.

On the other hand, the developed countries — where things are slightly more stable (although that’s changing) — await regulatory clarity before they jump in with both feet.

The Lummis Bill, sponsored by US Senators Cynthia M. Lummis (R-Wyo.) and Kirsten Gillibrand (D-N.Y.), aims to bring regulatory clarity to the crypto industry in the U.S.

Here’s what you need to know.

For starters, there’s no guarantee this bill will pass in its current form, or at all.

If it does pass, it probably won’t look like it does today, but it will provide the clarity that the industry has been asking for.

As you’ll see, the bill challenges the fundamental direction crypto regulation was headed in the United States.

In the past, for example, SEC head Gary Gensler has argued that most crypto assets are securities and under the purview of the SEC.

The Lummis Bill argues that “most digital assets are much more similar to commodities than securities.” It makes clear that unless an asset is clearly a security — or is deemed one in court — it should be presumed that it’s a commodity. If it is deemed a security, the bill proposes quick and easy reporting requirements.

Consequently, the bill would guarantee that BTC and Ethereum are commodities, as well as the top 200 coins. And the Commodities Futures Trading Commission (CFTC) would be given authority over the secondary market for most tokens, including “digital asset exchanges,” or DEAs.

DEAs also include ‘decentralized platforms,’ which could include Automated Market Makers (AMMs) and other smart contract protocols.

An example of an AMM is Uniswap, a permissionless exchange that allows anyone to add tokens based on the token’s contract address.

According to the bill, DEAs will need to restrict which assets trade on them — obviously, this is impossible for AMMs to comply with.

It’s not clear how this bill would handle permissionless exchanges like Uniswap and many others.

The bill would forgo taxes on Bitcoin transactions under $200, allowing Bitcoiners to buy goods and services with Bitcoin without paying capital gains taxes. (As mentioned yesterday, not too many people are keen on using Bitcoin for daily transactions, but this is still a step in the right direction.)

The bill proposed that centralized stablecoin issuers (like Tether and Circle (USDC), centralized exchanges, and DAOs must be officially registered. With all of the talk about stablecoins lately, this was an obvious move.

The bill would also make self-custody perfectly legal. The ability for self-custody is one of the most important aspects of crypto. Again, having this as a fundamental right — enshrined into law — is a step in the right direction.

The bill would remove the forced income tax on miners. Currently, bitcoin is taxed as income the second it’s mined, which many Bitcoiners believe is unfair. Gold miners don’t pay taxes on their gold until they sell, so why are Bitcoiners treated differently? The current rule forces miners to sell their Bitcoin in order to pay their tax, triggering capital gains taxes. Removing the income tax would allow miners to hold bitcoin longer: a boon for Bitcoin holders.

The bill makes it clear that miners, operators, and developers will be excluded from the definition of “broker.” You might recall that certain language was slipped into Congress’ infrastructure bill last year about regulating brokers like traditional exchanges. This caused worry that the definition of “brokers” was too broad and, technically speaking, would require developers, miners, and DeFi exchanges to report every single person they (or their protocol) interacted with. 100% impossible.

Contrary to what you might’ve heard elsewhere, the bill doesn’t require DAOs to incorporate as entities. It only says that DAOs have the option in order to glean tax benefits.

Apart from the aforementioned DEA issue, the bill does provide much-needed clarity, and the majority of it tilts in the industry’s favor.

Not everyone is enthused, however.

“The status quo would be better than this bill. So many of these tokens are securities and need to comply with the regular, usual securities laws, and this bill tries to create a special crypto-specific disclosure regime that I don’t think discloses all the information investors need to fully evaluate whether to purchase a security.”

“Lummis Bill thoughts: The bill is strikingly broad. Reporting, taxes, brokers, etc. are all under its umbrella. It’s MUCH better than the status quo. It carves a niche for digital assets that are subject to SEC oversight if they are “investment contracts.”

Lummis tweeted that, though she didn’t want to understate the challenges ahead, “America has crossed the ‘chasm’ of ‘is this real’ (yes) and ‘will it be banned’ (no). The questions/challenges are different now.”

In other words, crypto is here to stay. It’s no longer fringe. And it’s gaining real support in all of the right places.

As we wrote in our Big Book of Crypto, you might be bullish on crypto, but you’re probably not bullish enough.

Beyond just the regulatory landscape…

The Bull Case For Ethereum

We have seen large moves and supply shocks in crypto before, but I believe the Merge will create the largest and most violent one we have ever seen at scale.