“The Fed is Destroying Money Now”

Upon writing, we await the Fed’s next announcement.

In the meantime, we dug up the story of modern monetary policy in three acts: 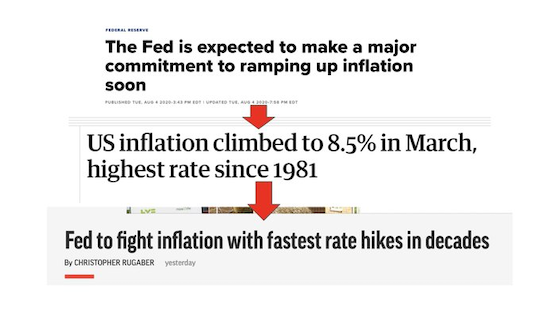 As you know, the Fed was wrong about inflation, causing it to shift gears.

The signal came on November 30, 2021, when Powell said this to Congress: “what we missed about inflation is that we didn’t predict the supply side problems.”

When it comes to inflation being transitory, he added, it’s “probably a good time to retire that word.”

In response, Dylan LeClair made this observation on Twitter: “The Federal Reserve system has 2,500 full time employees, 400 of whom are PhDs in economics/finance, and every single one of them was wrong about inflation.”

But they weren’t wrong about everything.

The Fed was home to perhaps the best traders of the decade.

Last year, members of the Fed got caught trading stocks the Fed was buying. Best part? They sold right at the top to “avoid” conflicts of interest — right before Powell signaled the Fed would be raising interest rates.

The blue box is when they sold: 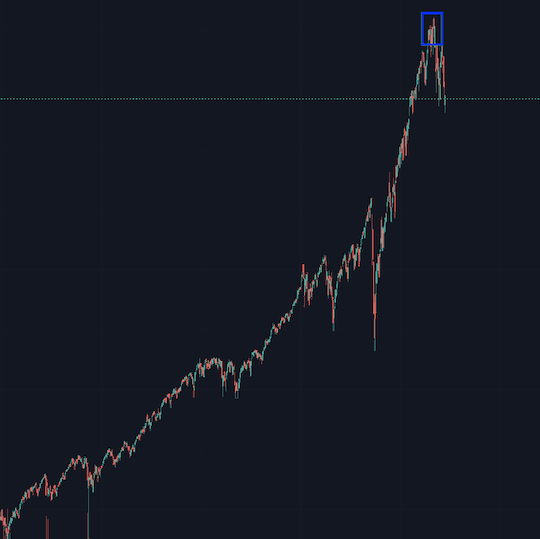 Moreover, Jim Rickards has pointed out that this inflation number isn’t a one-month blip, “but is part of an established trend.”

“Inflation for the full-year 2021 over 2020 was 7.0%. Inflation in January was 7.5%, and in February was 7.9%. The inflation trend is not only persistent; it’s getting worse. The Fed missed this trend entirely and is now racing to catch up.”

And what is the Fed expected to do now? Quantitative Tightening, the opposite of the Quantitative Easing we’ve seen since 2008. “Critics who yell about ‘money printing’ are behind the times,” says Jim.

“The Fed is destroying money now.”

And, he says, the Fed is doing so in the face of economic weakness. Supply chain disruptions, war in Ukraine, perpetual Chinese lockdowns: “it’s not a stretch,” he writes, “that the U.S. economy may fall into a recession before the end of 2022.”

Many Ways to Play

He’s given his subscribers several ways to play this ongoing trend. (And, though our beat has largely been crypto -- and our long-term thesis hasn’t changed -- we’re not against preparing for the worst in the short term.)

When Powell signaled on Nov. 30 that rate hikes were to come, Rickards noticed a popular technology company peak.

He outlined three reasons for the peak:

This trend, Rickards writes, presents a unique opportunity for investors.

In his latest alert, published this morning, he sent his Countdown to Crisis subscribers a guide on how to play it.

The rest of the alert, and the recommendation, is open to subscribers.

And if you want in, you gotta’ act fast. Unfortunately, the link below will expire tonight at midnight.

Click here to see if Rickards’ flagship research service is right for you.

“The Fed is Destroying Money Now”

“Crypto adoption is now massively outperforming the internet. It’s been growing at about 165% a year versus 85% for the internet for the same period of time now. This is the fastest adoption of any technology in all human history.”