The Next Big Disruption in Crypto

In 1995, nobody understood the Internet.

In business meetings, everyone wanted to know who the executives of the Internet were and how they got in touch with them.

“OK. But who decides?” they would ask the unfortunate technologist tasked with explaining the Internet to them.

They didn’t get it.

In 2013, nobody could understand Bitcoin.

Again, they wanted to know who the CEO of Bitcoin was.

Nobody had ever heard of a “leaderless” network.

Most people are trained to look at the world through the lens of a “spider” organization. They have trouble wrapping their heads around the “starfish” organization.

That’s why crypto is so difficult to understand.

Today, we’ll talk about what the rise of crypto has to do with the Spanish army, the Aztec empire, the Apaches... and starfish.

Before we go there…

There’s a huge “disruption” scheduled for the crypto market this week.

This event could also spark the biggest revolution to the crypto markets since the very first digital wallets came into existence.

A disruption this big will also create winners and losers — some cryptos will thrive, while others disappear.

That’s why James hosted a special webinar at 1 p.m. Eastern today to tell you all about it.

Today’s replay goes live at 7 p.m. Eastern today. So you’ll want to make sure you’ve got a seat at the event.

(Clicking the link does not obligate you in any way to attend the event. By reserving your spot, you will receive event updates. We will not share your email address with anyone. And you can opt out at any time. Privacy Policy.)

The Starfish and the Spider

In their book, The Starfish and the Spider, authors Ori Brafman and Rod Beckstrom use the two organisms as useful metaphors for distinct organizational structures.

Spiders are centralized entities. If you cut off the head, it dies.

Starfish are decentralized entities. Starfish don’t even have a head. The major organs are replicated throughout each arm.

Cut the starfish in half… it doesn’t die. You get two starfish.

Cut one arm off? Most starfish will grow a new one.

Some species of starfish, like the long-armed starfish, can replicate itself from just a piece of an arm. Cut it into ten pieces and you could get ten starfish.

Intelligence is distributed throughout the entire organism.

For the starfish to move, one arm will start moving in a direction and will have to convince the others to come along. Starfish also don’t have a central command. They don’t even have a brain.

What sets the starfish most apart from the spider is the former’s capacity for regeneration. 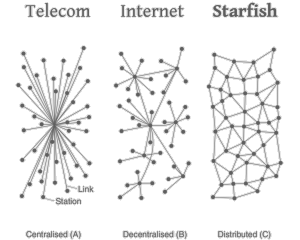 Keep in mind, this book was published in 2008. Nobody except for a few cryptographers had ever heard of Bitcoin or crypto. Even so, the starfish analogy couldn’t be more perfect.

They also used historical examples to make their points.

The Fall of Montezuma

The Spanish army defeated the Aztecs within a few short years… but couldn’t defeat the Apaches in 200 years.

Why? Unlike the Aztecs, the Apaches had no clear hierarchy.

In 1519, Hernando Cortes traveled to what is now Mexico City.

Where he expected to find small tribes living in primal conditions, he discovered the opposite: a thriving metropolis with a population of 15 million -- called Tenochtitlan -- surrounded by magnificent temples and pyramids.

Cortes and his army began their attack. Because the city was centralized, they just had to barricade key chokepoints.

By 1521, the Aztec empire had collapsed.

So when they arrived in New Mexico and came across the Apaches, they didn’t even wince. The Apaches hadn’t paved a single road. They had no permanent temples or even towns.

So when the Spanish army set out to control the Apaches, they thought it would be a piece of cake. After all, they’d just defeated an empire.

For 200 years, the Apaches held off and defeated the Spanish.

How the Apaches Defeated an Empire

As Brafman and Beckstrom put it:

“It wasn’t that the Apaches had some secret weapon that was unknown to the Incas and the Aztecs. Nor had the Spanish army lost its might. No, the Apache defeat of the Spanish was all about the way the Apaches were organized as a society. The Spanish couldn’t defeat them for the same reason that the record labels weren’t able to squash the P2P trend.”

The Apaches persevered because they were decentralized.

What eventually broke the Apaches is when Americans gave the medicine men cattle.

That’s all it took.

This had the effect of centralizing property rights, creating a clear hierarchy. The Apache became a spider.

But this story has everything to do with a HUGE “disruption” scheduled for the crypto market this week.

The End of the World as We Know it

It sounds hyperbolic, but from this disruption…

That’s why James hosted a special webinar at 1 p.m. Eastern today to tell you all about it.

Missed it? Not to worry. We’ve got your back.

Today’s replay goes live at 7 p.m. Eastern today. So you’ll want to make sure you’ve got a seat at the event.

(Clicking the link does not obligate you in any way to attend the event. By reserving your spot, you will receive event updates. We will not share your email address with anyone. And you can opt out at any time. Privacy Policy.)

James came clean about Bitcoin, and shared with his readers why he just got out of the digital currency completely.