“Powerful forces are at work,” says Dacid McRee in his book The War on Cash, “and they are not working for your personal benefit.”

“All over the world,” McRee goes on, “including the United States of America, governments, certain academics, banks and civil service organizations (including large non-governmental organizations [NGOs]) are cooperating to stop you from using cash.”

We’ve been tracking this trend for almost a decade. Though it was already accelerating in 2019, we saw it hit the Insanity Button in 2020.

But even pre-COVID, you probably experienced this war firsthand. Chances are, you thought nothing of it.

Perhaps you’ve heard of the IRS seizing bank accounts of small businesses because they make regular deposits of cash into their bank accounts. Perhaps you’ve heard of police treating with suspicion anyone who happens to have a large amount of cash on their person -- guilty until proven innocent. (According to the logic, the cash itself is evidence enough they are up to no good.)

As McRee points out in his book, “these attacks on your cash and your privacy are not isolated events, but are representative of a worldwide trend that is affecting everyone and involves mega-millions of dollars.”

Though McRee might sound like a loony conspiracy theorist, his book is full of compelling examples of this massive trend.

And, if he’s right, it’s obvious the endgame:

The war on cash is leading us toward a world of Central Bank Digital Currencies -- CBDCs.

Governments will say they’re a great way to combat terrorism, corruption, and money laundering. They’ll say it’ll help them rout out the bad apples and capture cartels. In reality, once all’s said and done, they’ll focus on the easy targets… people like you and me. CBDCs will give professional busybodies the unfettered ability to track and micromanage every aspect of your financial life.

That’s not to say governments are certain to abuse this power. But, come on. We all know they will.

With CBDCs, for example, governments will know precisely how much money you have, how much you’re spending and how you’re spending it. Worse, they’ll have the ability to freeze your account and control how and where you spend your money.

In June 2021, Tom Mutton, a director at the Bank of England, said that programmability will become a key feature of any CBDC. Meaning, the CBDC would be programmed to do precisely what the issuer (the central bank) wants it to do. If the government wants to ban cigarettes and ice cream on Tuesday, good luck getting them at your local 7-11.

“There could be some socially beneficial outcomes from that,” said Mutton, “preventing activity which is seen to be socially harmful in some way. But at the same time it could be a restriction on people’s freedoms.”

In other words, politicians are becoming far too comfortable with the idea that they can track, trace, and control your finances from a remote location.

As a reaction to this, a lot of people are looking to crypto.

Bitcoin and Ethereum Won’t Solve This

Problem is, cryptos like bitcoin and ethereum have weak anonymity.

On their own, they can’t solve the privacy problem.

Privacy is not baked into the cake. Because of the radical transparency of the open ledger, no criminal with more than two brain cells to rub together is using bitcoin or ethereum for illicit transactions.

He wrote: “Cryptocurrency offers a novel way to bring privacy to some of our most sensitive data: our personal financial information. Privacy coins and non-custodial wallets will eventually go mainstream, just as private messaging apps have (Whatsapp, iMessage, Signal etc). Encryption is an important tool for everyone. Just as the internet moved from HTTP to HTTPS as the default, cryptocurrency will as well.” 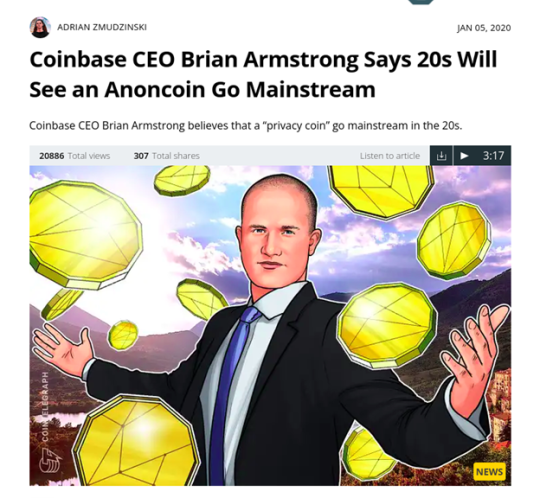 Last April, John McAfee predicted that governments would soon ban privacy coins. “But,” he added, “these laws will have no more teeth than the ineffective laws against Marijuana.”

“If decentralized privacy-preserving cryptocurrencies become popular in the future, to the point they can be routinely exchanged without users having to convert to other currencies and systems, there is no obvious way for regulators to impose post-hoc regulation.”

Ultimately, we believe privacy coins are here to stay. If DeFi is to become a driving force in the future of finance -- which we believe it will -- we will need some way to keep our transactions private.

Currently, James and I are looking at a host of coins that will provide privacy in DeFi, stablecoins, and the cryptocurrency ecosystem. At the moment, Monero is considered the gold standard for privacy on the blockchain.

But we believe there are even better, more secure options.

In fact, we’re putting together a special report on this exact subject.